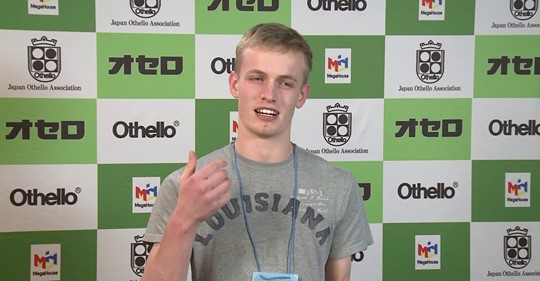 In Tokyo, and WOC 2019, we did an Interview with Luke Plowman [Great Britain] after his first round win. Since then Luke have been very active to play online. Because Luke is a player who started play Othello when he was youth, we decided to ask Luke some more questions.

Othello News: Hi Luke! How are you? Can we make a short inteview with you about Othello?

Othello News: When and why did you start with Othello?

Luke Plowman: I started playing Othello in February 2013 when I joined my dad in playing at the Cambridge EGP. I lost all my games but enjoyed it very much, and was blown away by how nice and accepting the community was, which is the reason I kept playing and practising after that.

Othello News: you and Guy were in Stockholm  in 2013, too, how old were you back then?

Luke Plowman: I turned 13 that September so I was 12 in Cambridge and Sweden.

Othello News: You say "the community was nice and accepting". You have travelled to other countries and tourneys. And met players of different age. Is the othello world (community) special, and if so, how? What makes the Othello community so special?

Luke Plowman: There are people of all ages and all abilities in a way that other communities just don't have to the same extent, and yet everyone was willing to chat to me at my first tournament, despite me being the worst there, and teach me how I could improve after playing me. The most similar community I'd been in before was chess but that was very competitive (in a negative way), and not very social, so I was nervous about Othello because of that but there was such a stark contrast between the two. I think the main thing is that I thought the older players would all be very cold and unwelcoming to someone as young and rubbish as I was, which is just not the case at all. 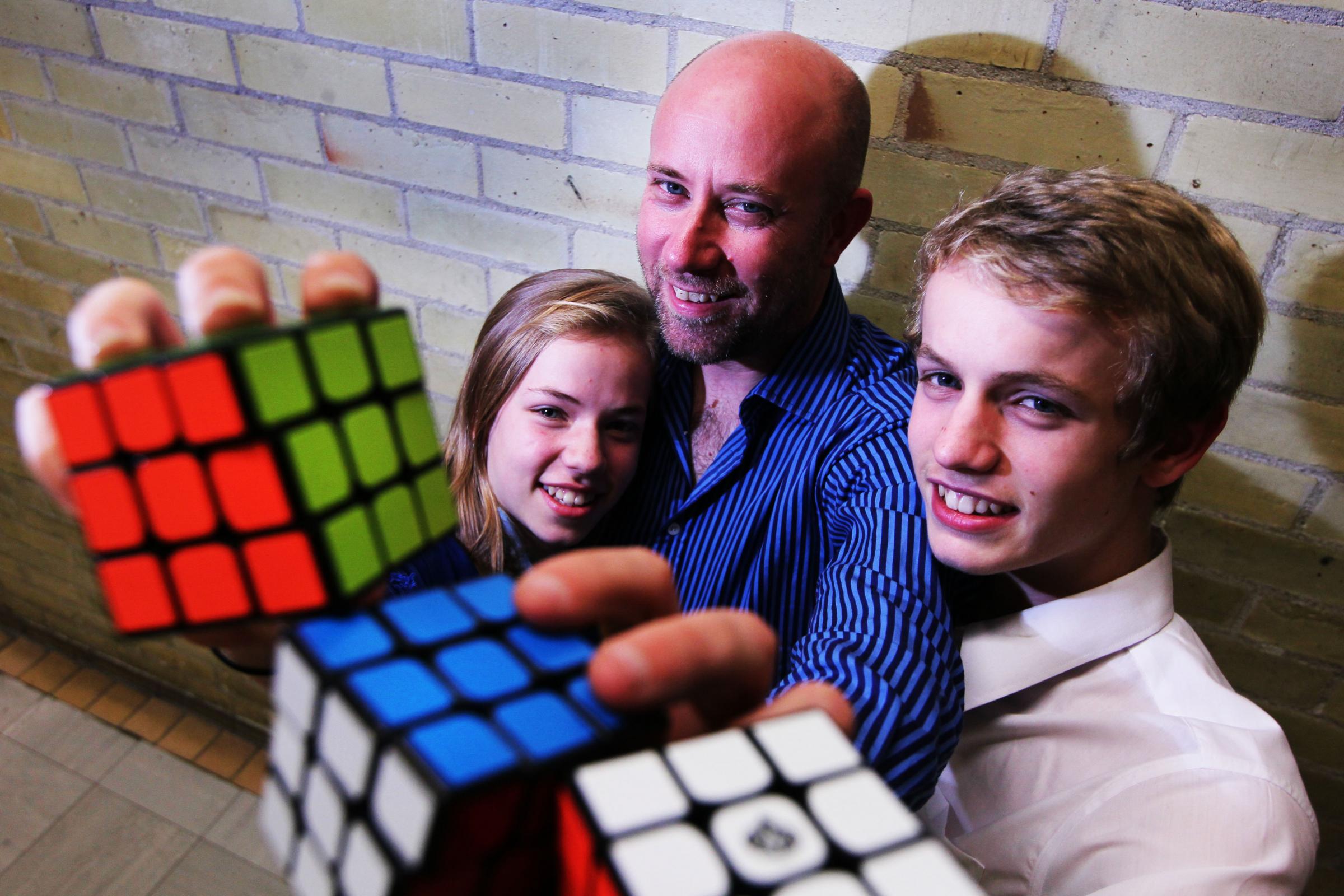 Othello News: You mentioned Chess: Do you play or have played other games/sports?

Luke Plowman: Speedcubing (Rubiks cubes), chess, table tennis, and football are the other things I've competed in. Each to different standards.

Othello News: You are "raised" in an enviroment that loves games. What is your advice to young persons who like to play games, Othello mostly, of course? How to continue to play?

Luke Plowman: Play something that you enjoy.With othello, I'd say don't be afraid to not practise if you're not enjoying it, unless you're wanting to become the european champion; play as much as you enjoy. I really enjoy playing lots and lots of 1m games online and I find that it has also helped me improve my game in ways that practising problems, and thinking through specific positions doesn't.

Othello News: We always ask everyone we interview: "what is your best Othello memory, so far"?

Luke Plowman: WOC 2019 in Tokyo. The combination of (mostly) great food, great people, and a great country that I'd never been to but had always wanted to. It was my first time being out of Europe or on a flight of more than 2 hours, and then experiencing the earthquake (which made me fall over on my hotel bed) and typhoon on top of this was just surreal. Close second is the Cambridge EGP 2020. I got my girlfriend to come to her first tournament, and I beat Takuji Kashiwabara who is the best person I've beaten officially by a while.

Othello News: Is it any players/persons who have been inspiration for you in the othello world?

Luke Plowman: Firstly, my dad Guy Plowman - I wouldn't be playing without him, and he has taught me a lot about the game.
Imre Leader. He'd given me a tour of Trinity College about 6 months before my first tournament, and we'd talked about Othello a bit during that time. Even though I knew next to nothing about it at that time, I went away wanting to try it properly; Imre is a fabulous teacher.
And then finally, Akihiro Takahashi. I played him at the WOC last year and got wiped out. It was incredible to see just how deeply the best players could see the game, and how, even though I was trying, I was just no effort at all for him to beat. He was also so lovely, and signed my Othello board at the end of the tournament. 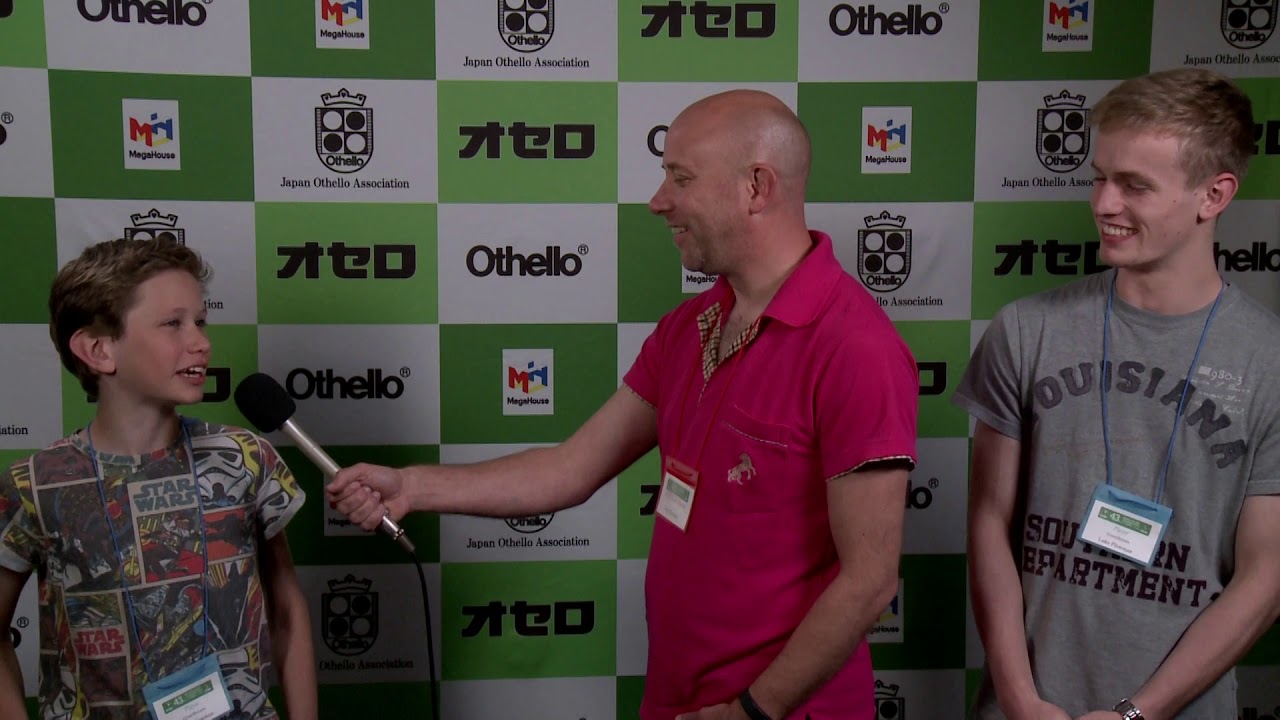 Othello News: Akihiro Takahashi mopped the floor with me, too, when I got to play against him in WOC 2017! So, no shame in losing to him.
Luke Plowman: Definitely! It was incredible though! Up there with the typhoon!

Othello News: You have now started up an Othello Isolation whatsapp group together with Ivan chan. How came that idea, what is the thoughts/goals and how is the response?

Luke Plowman: He posted about Othello on Facebook and I challenged him to a game on that post. We played and continued talking after it, which led to the idea of the group. It currently has 40 members in less than a week, with a goal to enable people to be able to play someone they know, and get to know new people even when they're not online, thus improving the community side of Othello.