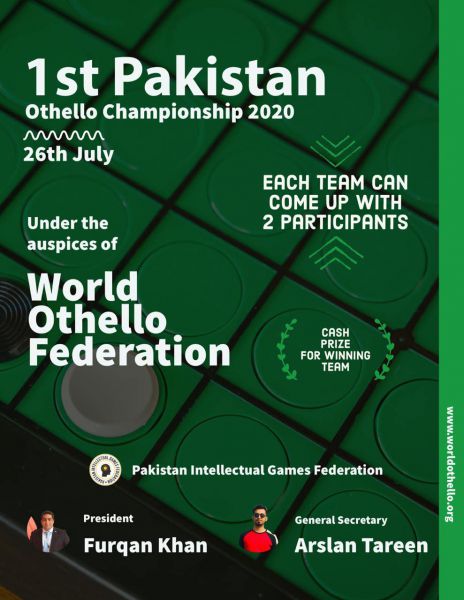 The first Pakistan Online Othello championship was played on 26th July, 2020. There were 32 brave participants in teams of 1-2 players participating in this single elimination tournament! The tournament had a total of 5 rounds. The winner was Sardar Mahmood! A big congratulations to him for winning the tournament!

The tournament was the first of its kind and the pakistani minister of sports was an esteemed guest of the tournament! There are plans for a future double elimination tournament  to take place which will potentially have over 200 players! We certainly look forward to this momentous occasion!

Furqan: Hi! This is Furquan from Pakistan

Daniel: Hi! How are you?

Furqan: I am good! How are you?

Daniel: I'm writing an article about the first Pakistan Othello championship!
So, I was curious about how the tournament was organized. There were teams of two and some sort of lottery system. Could you explain how the pairings worked?

Furqan: There were total 36 people. We used a draw system, just like lottery. The tournament took place under single knockout system. Teams are made but they play individually, so that if one team mate lost the other could be in the game. Eeach player was assigned a number and if one player took out the number 15 and another took out the number 16, then player with number 15 & 16 would play against eachother.

Daniel: So, there were 5 rounds?

Furqan: Yes, but we are planning to do next time double knock out system.

Daniel: So, next time the players have an additional chance to play?

Furqan: Yes, so that players get one more turn to remain in the tournament. The response of Othello in Pakistan was really good. People liked it! I don't know, next time may be more than 200 players gonna play and we will have to control it on large scale. We were planning that Tadataka Maehata from Japan and Benk Steentoft, from Sweden were going to visit Pakistan this year, but due to the Corona virus, it could not happen. We plan to launch Pakistan Othello championship on large scale and we had the pakistani minister of sports as our honored guest.

Daniel: Who won the tournament?