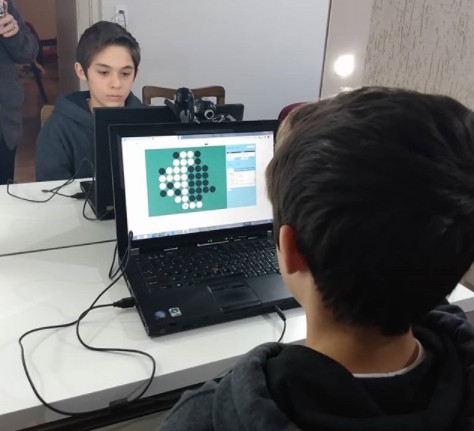 Othello´s matches started end of July. For seven weeks, a board of eight columns and eight rows and 64 discs in the collors black in on one side and white in the other drew the attention of 77 students and 8 teachres from 28 municipal schools of Criciuma.

Techer Liliane Nicola, from Lili Coelho School, got the general first place and she was the only player to win all matches. “I made the inscription in order to encourage the students from my school. They helped me a lot, we practiced, I got the tips of don´t flip too many discs in the opning and I had an unexpected result” said Liliane.

Lucas Cherem took part of 4 WOCs and he is Brazilian and pan-american champion and one of FBO founders. “Since our foundation in 2006, this was the most important job of FBO. We always try get more people, but I think we have never had so effective success until now. When Criciuma´s revolution be told, Othello´s community will be very interested”, said Cherem.

Soon, the classified players will play four matches to reach the spot for the selective tournament for WOC and the winner school will be known.

N.T. Ana Lúcia Pintro is a Math´s teacher and coordinate a Math´s club of Criciuma city that is made up of more than 400 students (age between 11 and 15) and 17 teachers from 20 schools.. She was introduced to Othello in 2019, during pan-american Othello championship. She took Othello to her city and it was a huge success between students.

The tournament was online due covid´s restrictions. Some of the most experienced Brazilian players acted as coaches. Mitsuru Dairokuno organized weekly meets to provide strategy tips for participants.

After the tournament, many students plays daily. They use a whatsapp group to schedule matches, ask for questions and comment the games. Old players take part to keep the flame burning.