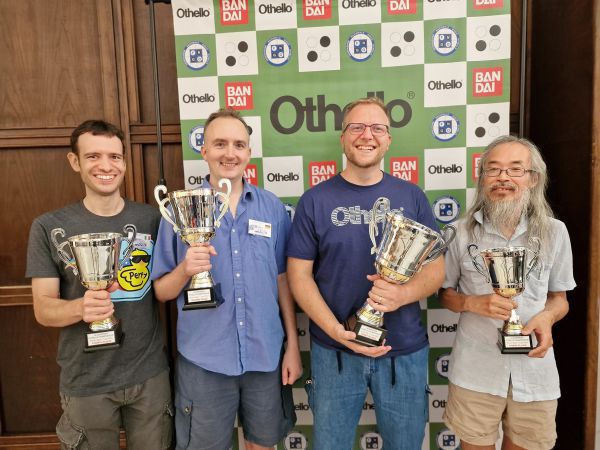 The 1st European Championship was finally held in Rome, Italy. Due to Corona, the EOC was postponed until now. 52 players joined to a very warm Rome. It was a very interesting tournament who was uncertain until the last round who was going to each round.
The EOC organizers Italian Othello Federation (FNGO) & the European Othello Confederation (EOCF) worked hard to make this first European Championship to a success. There was a lot of uncertainty regarding restrictions on travel and arrangements, costs that increased exponentially, and concerns about having to cancel the tournament again just before the start. Just weeks before the start, players start getting sick again from Corona, so the concern was justified. Therefore, it was with pleasure to note that there were 52 players who participated.

Among the over 50 players, many of Europe's top players came, with ambitions to fight for the title "1st European Champion". Italy, as host, put their hope in Borassi, Sperandio and Di Mattei to try to win both the individual and team titles. European players who wanted to take up the fight with the Italians for the title were among others the Dutch Nicky Van den Biggelaar, the French Takuji Kashiwabara and Marc Tastet (former World Champion in 1992), the Swedes Oskar Eklund and Niklas Wettergren, the German Matthias Berg and the British David Hand.

FNGO report very good about the tournament.  We quote their review of the tournament:
"The first European Championship was a success, not only for the results obtained by our players. The Federation managed every aspect of the competition, from the choice of location, from the purchase of cups, gadgets, lunches, to the technical management of the tournament itself. Not to mention the support to foreigners for the dinners before and during the competition and the social broadcasting of the event, with photos, interviews, live matches and everything that has made this European Championship a world-class tournament. For this reason we cannot fail to mention those people who have given up playing or who have played knowing that they are putting their performance behind the success of the event itself. Thanks therefore to Leonardo Caviola, to Paolo Scognamiglio, to Chiara Gigliucci."