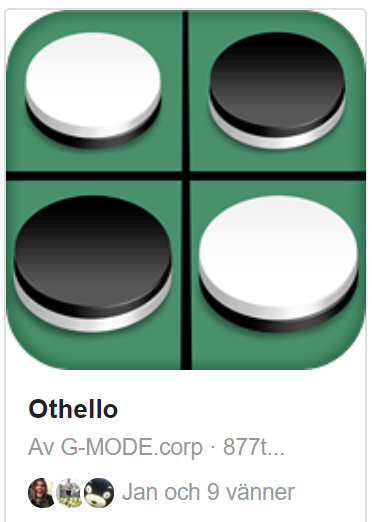 A review of the Facebook Othello app, developed by G-MODE corp!
It have been over 800.000 games played at the Othello app. Is this maybe the largest Othello online app in the world? How good is it? Our reviewer, Daniel Turunen, gives his view on the Facebook app Othello.

In spite of a few hiccups while trying to connect to a game this app comes with quite a few nice features, (and yes, it is spelled hiccups and NOT hick-ups, as one of my dear friends so adamantly pointed out to our amusement)! It has a snazzy theme and comes with a selection of three modes; vs a friend, vs world and single play.
You can easily challenge a friend if they have a facebook account or go up against anyone from around the globe in vs world mode. If you choose the third mode, single play, you can play against an AI opponent and have a choice of eight difficulty settings! A nice feature when playing against the AI is that you can take as much or little time as you like when making your moves. Should you want to commit Othello blasphemy, not that you would want to, that is now possible thanks to  customization options! In a recent update you are now able to earn coins to unlock different board and disc skins. You earn coins by winning games and collecting your daily login reward. The skins range in price from 100 all the way up to 4000 coins. Whilst changing the classic color scheme might not appeal to everyone its not a bad feature. Thankfully the skins are only obtainable by in game currency and there are no microtransactions to attempt to pry open your wallet. There are currently 10 board and disc skins available for purchase.

The app has a quick and easy to use interface, with an authentic Othello game board which has nice animations and authentic disc flipping sounds. As the game progresses the disc tray slowly empties until it is completely empty at the end of each game. One could argue this to be unnecessary fluff, but I do like the attention to detail! The turn timer is generous; being at 30 seconds per turn, and it is easy to estimate how much time is left on each players turns.