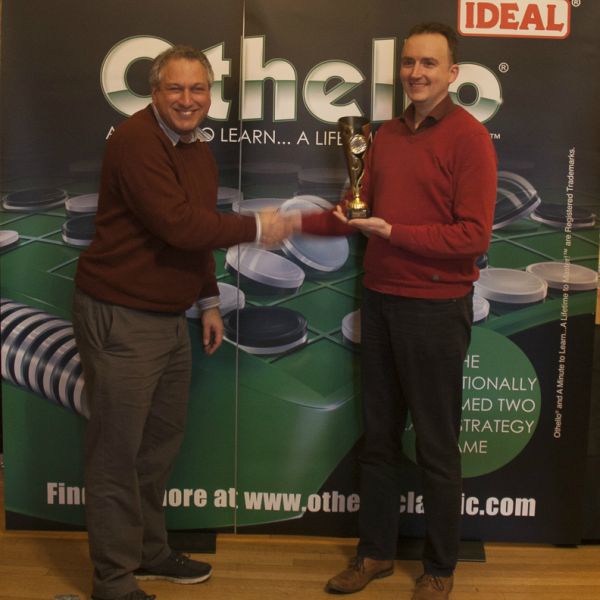 It was Saturday 17th March, a normal February day. The sun was shining across the city, which was named Cambridge. The ancient walls of Trinity College brightened up and gave us a memory of ancient times, long before WZebra, nTest and taxis were invented. Entering the Trinity great court, wandering over the courtyard, trying not to walk on the lawn, and finding the way into the Old combination room, was like joining a Harry Potter movie. I was just waiting for Professor Dumbledore to open the gate and welcome us to Hogwarts!
The alternative to Professor Dumbledore is Professor Imre Leader. Not a bad alternative, if I do say so myself! Imre greeted us warmly welcome to the 29th Cambridge EGP. There were 35 players attending the tournament. It became a high-level tournament that was played in the incredible Old Combination room. I have to say that Cambridge EGP is one of the most beautiful Othello tournament venues we have. I recommend you to sign up next time, if you have not been there before!

The tournament itself?
The youngsters. There were 10 young players registered. One could say that it was a sibling matc 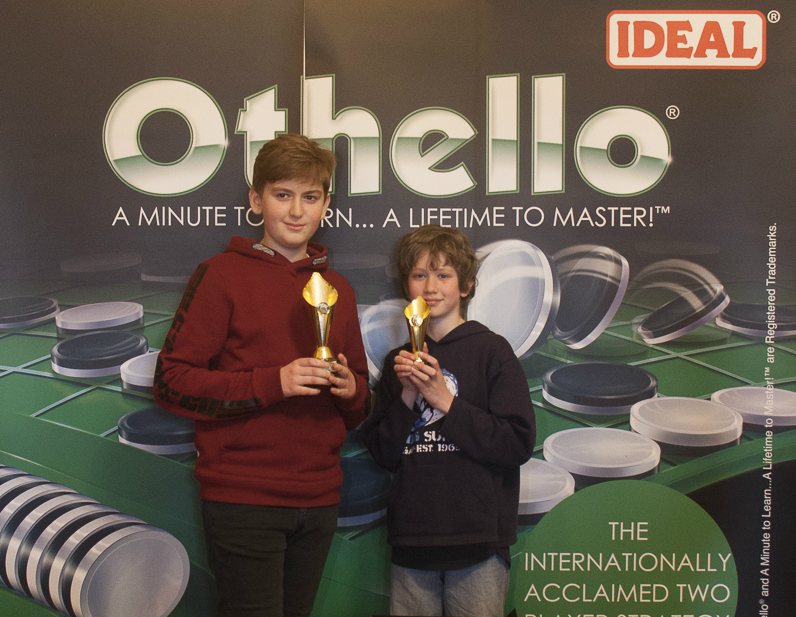 h between the families Brand, Plowman and Tastet. The two best youngsters would play a final match, to decide the Cambridge EGP youth champion! The final pair was Remi Tastet and Marc Plowman. Both scored 5 points in the main tournament! French Remi Tastet won the final with 39-25.

The olders then. As we wrote in the "before Cambridge EGP" article, it was not so easy to guess who would win. There was a large starting field with many players at the same skill level. After day one there were eight players who had more than 5 wins. It was understood that among these eight, we would find the winner of the tournament. Oskar Eklund and Marc Tastet were at the top with six wins each. Then there were a couple of players with five points. Matthias Berg, Tom Schotte, Niklas Wettergren, Thierry Levy-Abegnoli, Emmanuel Lazard and Imre Leader. Notable was that Marc Tastet's loss came against Tom Schotte (52-12); and Oskar Eklund lost to Marc Tastet (29-35).
Both Marc and Oskar started the tournament very well. We recommend that you check out the games at www.liveothello.com! On Saturday, Marc played against Imre Leader, and won with a score of 43-21, and Oskar defeated Matthias Berg with 41-23.

Saturday evening!
As always in Cambridge EGP, there was a dinner planned after the last round of the day. Almost 50 people decided to attend the dinner, so it was necessary to be held in two different resturants! This is one of the reasons many european players travel to EGP. Not only to play & have fun, but to also enjoy good food & good company! On saturday evening we have fun and social events where you have time to talk with friends you have learned to know through othello. Othello is for many of us, not just a competitive mindsport but also a social event; and a chance to meet good friends and get to know new ones!

Day 2
Time to find the Champion! Marc Tastet continued his path to victory, winning all his matches on Sunday morning. Four wins, and the final place was secured! Oskar Eklund did not have the energy to continue winning. Despite fierce fighting,  Oskar only managed to secure a single victory, and fell down to a sixth place. Instead, there were three players who had five points the 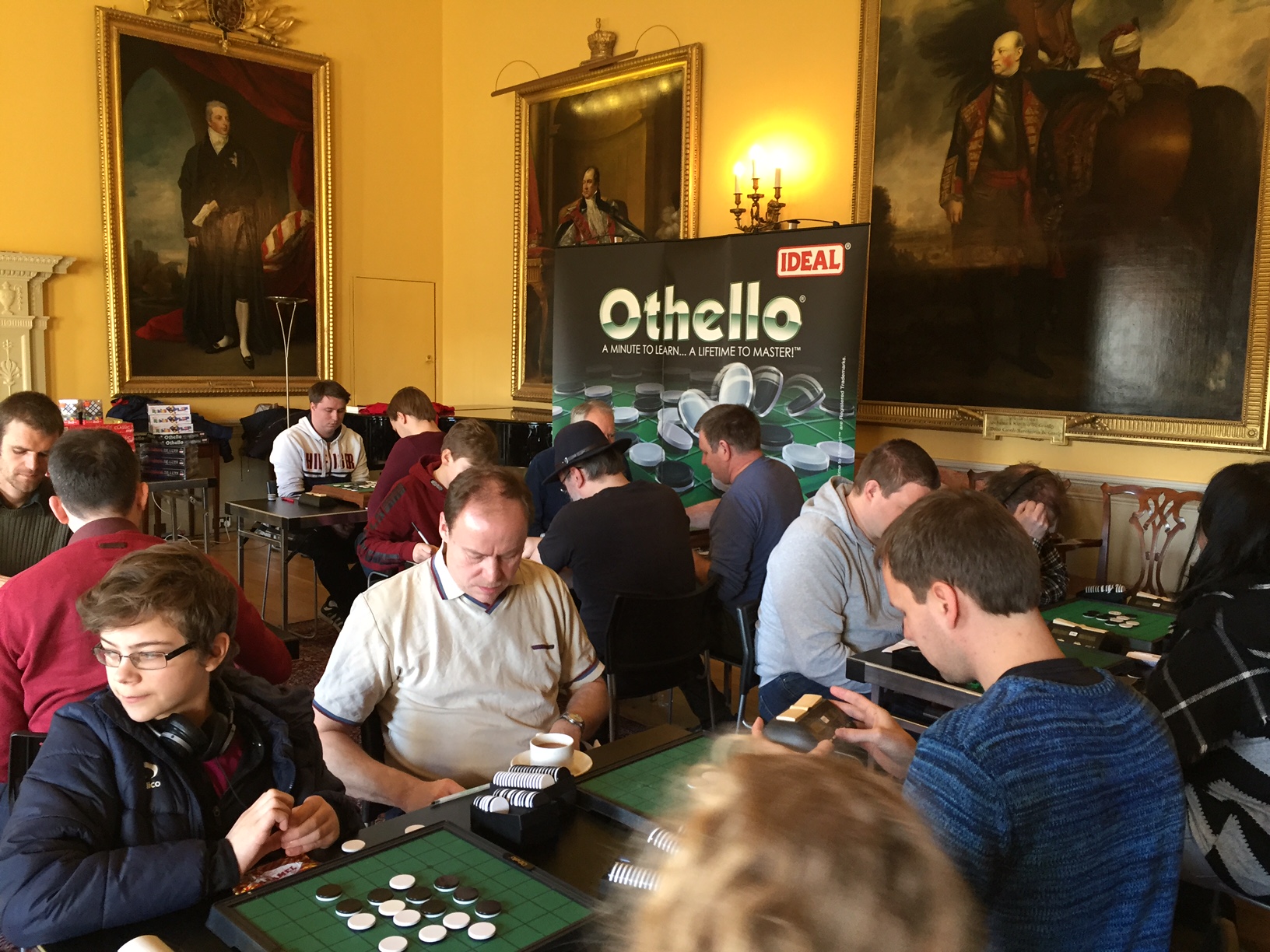 first day who secured their place in the finals.
Before the final round the championship title stood between Matthias Berg, Niklas Wettergren and Imre Leader. A crucial match was Matthias Berg's victory over Takuji Kashiwabara (33-31) in the final round. Had Takuji won that match, Niklas Wettergren would have played the final IF he also won over Thierry Levy-Abegnoli at the same time. IF Imre had not gained the final if he won against Albert Kortendijk. It was a very exciting last round!
Matthias won against Takuji. Niklas got 33-31 againt Thierry, and Imre lost to Albert (25-39)
Because of higher MBQ Matthias Berg got to play the final games against Marc Tastet. Niklas and Imre should meet again in a game about the third place.
It was even and exciting for the final rounds, just like a good and intense tournament should be!

The finals
In the swiss part Niklas won against Imre. Should Imre get his revenge immediately? The answer was no. It was a very tight game, thats for sure. It felt like Niklas had a firm grip on the game and didnt let Imre come close enough to victory; with a final score of 35-29 to Niklas.
In the final Matthias got his revenge and won the final with 2-0 (40-24, 40-24).

Now we mostly mentioned the top players. But there were 35 players there, and there were many fun & good games played! You can see all players in the standings below.

Some curiosa!
Matthias Berg won his 7th European Grand Prix tournament! He wins roughly one tournament every four years (2002, 2006, 2010, 2014, 2018). In 2017 he broke his own rule by winning 2 tournaments. With his 7th win he moves to an all-time 10th place in the medal mirror list, overtaking Karsten Feldborg and Stéphane Nicolet!

Marc Tastet lost his 6th consecutive final; the last one he won was Paris 2015 against Takuji Kashiwabara. The latter started the 2018 season as usual: not scoring too many points (3), letting other players think they can win the European Grand Prix series, only to strike back in the last tournament(s).