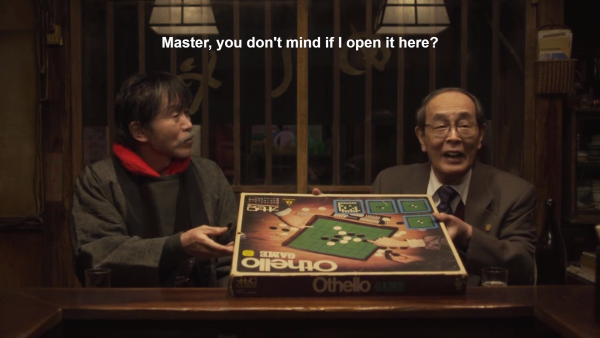 It was a Monday night. I was tired. No desire to do anything but lie on the couch, lift my feet on the sofa, turn on the tv and just relax. Saw that Netflix released a Japanese television series called Midnight diners: Tokyo stories. Thought that it could be nice evening entertainment, and put it on. I started to feel sleepy, and I woke up when I saw that they developed an Othello game in one of the programs. I chose to look at that section in more vigilant state. It proved to be a very nice sympathetic story, where the Othello game was part of the action. "A bread ham cutlet brings back an elderly lawyer's memories of playing the board game Othello with his long-lost younger brother."

I liked the story. It is well played. What I appreciate most was that it was Othello that was played. It would have been logical if it was Go or Shogi they had played. But now it was Othello. The box they show is from an old Tskuda game. The episode also reminded me how easy it is for us to make Othello well-known and find new players. Take a game with you to a resturant, café or somewhere you are. Play and let others try to play. The first season of Midnight diners came in 2009. You can find them on Netflix and Youtube.