WOTM - The last round before next level 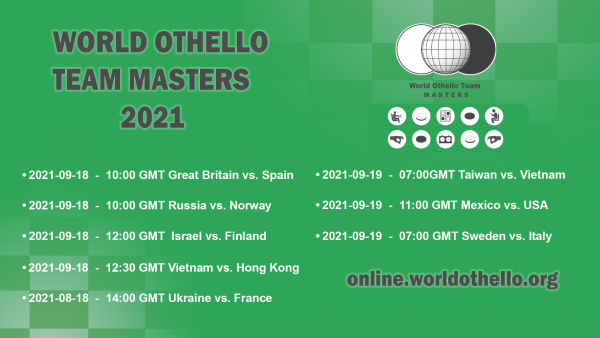 The 2nd October the next level of the World Othello Team Masters start. The top 16 teams, who will be divided in to four groups, will then be 8 teams to the Quarter final who starts in November.

This weekend it is the European groups who will be finished. Also the American and Asian confederations elimination matches plays this weekend. It is eight higly interesting matches this weekend. We will guide you through this weekend's matches and tell you about the premises for Q16.
The WOTM Match rules.

It is 16 teams who will play the Q16 qualification rounds. It will be four groups with four teams in each group. Next weekend the pairings to Q16 will be done at World Othello YouTube. The qualified teams will be seperated in three pairing groups, Group A - The winners, Group B - the Runner ups, and group C - The elimination match winners.

Asia Elimination matches: It is three teams who are fighting about one spot to the Q16. Saturday 12:30 GMT Viet Nam Othello vs. Hong Kong Othello. Sunday 07:00 GMT Taiwan Othello vs. Viet Nam Othello. Sunday 26th September the third game in the group will be played, Hong Kong Othello vs. Taiwan Othello. Every match is important! Sunday eve we will see if the next weekend match between Hong Kong and Taiwan will be the last fight about the spot to Q16, or if it only will be a great practice match.
The winner of this group goes to Q16.

America Elimination matches: The last match this weekend will be the elimination match between Mexico and USA. It is the first time the neighbours have played a team match. Mexico Othello vs. US Othello Sunday 23:00 GMT.  The winner of this match goes to Q16.

Europa Group A: The two top team Russia and Great Britain is already granted place in Q16. The question is who will be in pairing groups A, and maybe get an easier pairing then the runner up in the group who will be added to the pairing group B for the Q16. Russia Othello is playing with Norway Othello. Norway, who so far have no win, may do their best to win agaisnt the leader of the group. Russia Othello vs. Norway Othello Saturday 10:00 GMT.

The team who get the third place will play an elimination match next weeken against the European group B third team. It is three teams fighting about the third place. Sweden, Spain and Italy. The matches who is highly interesting is: Sweden Othello vs. Italy Othello Sunday 13:00 GMT, and Great Britain Othello vs. Spain Othello Saturday 10:00.

About the third place:
IF Sweden and Spain both win their games, Sweden go to the Q16, based at the fact that Sweden won the match against Spain.
IF Sweden win and Spain lose, Sweden go to Q16 with 2 more points then Spain.
IF Spain win and Sweden lose, Spain go to Q16 with 2 more points then Sweden.
IF both Sweden and Spain lose, Italy win against Sweden, it is three teams at same points. Because all three team then have won 1 match each against eachother, it is games who will be counted. Spain have before the match 71, Sweden 61 and Italy 58. Here it is an advantage for Spain, but we have seen many results in this tourney who are interesting. Sunday eve we will know the standings!